Video shows man walks into his house and catches his wife asleep on the couch in his best friend’s arms. He turns on the lights and wakes them up by yelling “Good Morning’ his wife wakes up in shock while the guy stays asleep, he taps on his best friend’s belly & says ‘Wake up Mother F****’, But he pretends to stay asleep.

His wife in shock of being caught tries to cover the guys face from being recorded & tells her husband to get out, the couple continues to argue, woman keeps telling him to get out, she grabs her phone and threatens to call the police.

Meanwhile his best friend name Brandon seems to hide his face in the blanket, he walks over to Brandon and asks him ‘what did you do’ & ‘own up man’, while his wife is on the phone calling cops. The man continues to record them and tells his wife ‘I got Enough Video’ I’m leaving. He exchanges a few more words with his wife and walks over to Brandon one more time & asks him ‘Brandon Don’t Have Anything to Say?’ gets no response and leaves the house.

Also Watch: Woman Catches Her Man With His Side Piece At Car Wash 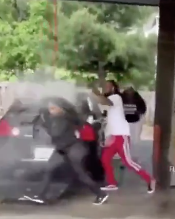